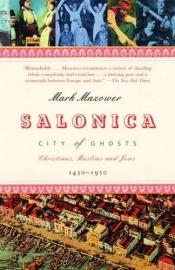 Salonica, City of Ghosts is an evocation of the life of a vanished city and an exploration of how it passed away. Under the rule of the Ottoman sultans, one of the most extraordinary and diverse societies in Europe lived for five centuries amid its minarets and cypresses on the shore of the Aegean, alongside its Roman ruins and Byzantine monasteries. Egyptian merchants and Ukrainian slaves, Spanish-speaking rabbis–refugees from the Iberian Inquisition–and Turkish pashas rubbed shoulders with Orthodox shopkeepers, Sufi dervishes and Albanian brigands. Creeds clashed and mingled in an atmosphere of shared piety and messianic mysticism. How this bustling, cosmopolitan and tolerant world emerged and then disappeared under the pressure of modern nationalism is the subject of this remarkable book.

The historian Mark Mazower, author of the greatly praised Dark Continent, follows the city’s inhabitants through the terrors of plague, invasion and famine, and takes us into their taverns, palaces, gardens and brothels. Drawing on an astonishing array of primary sources, Mazower’s vivid narrative illuminates the multicultural fabric of this great city and describes how its fortunes changed as the empire fell apart and the age of national enmities arrived. In the twentieth century, the Greek army marched in, and fire and world war wrought their grim transformation. Thousands of refugees arrived from Anatolia, the Muslims were forced out, and the Nazis deported and killed the Jews. This richly textured homage to the world that went with them uncovers the memory of what lies buried beneath Salonica’s prosperous streets and recounts the haunting story of how the three great faiths that shared the city were driven apart.

The Virtues of War

Latro in the Mist

The Outbreak of the Peloponnesian War

The Songs of the Kings

The Last of the Wine