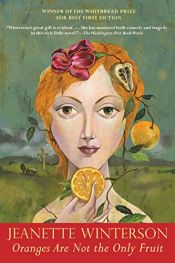 Oranges Are Not the Only Fruit

Oranges Are Not the Only Fruit is a novel by Jeanette Winterson published in 1985, which she subsequently adapted into a BBC television drama of the same name. It is a coming-of-age story about a lesbian girl who grows up in an English Pentecostal community. Key themes of the book include transition from youth to adulthood, complex family relationships, same sex relationships, and religion.
In the UK, it has been included on both GCSE and A Level curriculums, such as the OCR English Literature A Level, Literature Post 1900.

Nectar in a Sieve