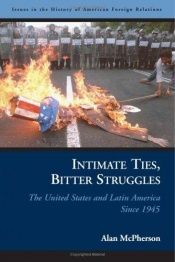 Intimate Ties, Bitter Struggles: The United States and Latin America Since 1945 (Issues in the History of American Forei

Over the last sixty years, the relationship between the United States and Latin America has been marred by ideological conflict, imbalances of power, and economic disparity. The U.S.-sponsored coup in Guatemala, the near lynching of Vice President Richard Nixon in Venezuela, and the disastrous Bay of Pigs invasion are a few reminders of the sometimes dramatic confrontations between North and South. Yet this relationship has also been characterized by accelerating economic and cultural interdependence that is significantly altering the old paradigm of U.S. hegemony and Latin American resistance.

Alan McPherson uses multinational sources to survey and analyze the history of this relationship. Intimate Ties, Bitter Struggles reflects the most up-to-date research on state-to-state interactions and recognizes the influence of culture and non-state actors on international relations. Major topics include the debate over economic dependency, the U.S. response to revolutions in Latin America during the Cold War, military interventions and covert operations, human rights, migration, the North American Free Trade Agreement and economic integration, the Iran-Contra affair, the war on drugs, and Latinos in the United States. The author’s concise narrative and selection of primary–source documents offer an ideal introduction to U.S.–Latin American relations for students and for anyone with an interest in understanding the dynamic interplay between these hemispheric neighbors.

The Art of Political Murder