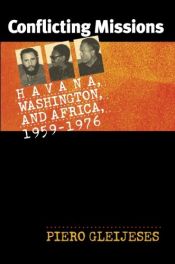 This is a compelling and dramatic account of Cuban policy in Africa from 1959 to 1976 and of its escalating clash with U.S. policy toward the continent. Piero Gleijeses's fast-paced narrative takes the reader from Cuba's first steps to assist Algerian rebels fighting France in 1961, to the secret war between Havana and Washington in Zaire in 1964-65--where 100 Cubans led by Che Guevara clashed with 1,000 mercenaries controlled by the CIA--and, finally, to the dramatic dispatch of 30,000 Cubans to Angola in 1975-76, which stopped the South African advance on Luanda and doomed Henry Kissinger's major covert operation there.

Based on unprecedented archival research and firsthand interviews in virtually all of the countries involved--Gleijeses was even able to gain extensive access to closed Cuban archives--this comprehensive and balanced work sheds new light on U.S. foreign policy and CIA covert operations. It revolutionizes our view of Cuba's international role, challenges conventional U.S. beliefs about the influence of the Soviet Union in directing Cuba's actions in Africa, and provides, for the first time ever, a look from the inside at Cuba's foreign policy during the Cold War.

"Gleijeses's research . . . bluntly contradicts the Congressional testimony of the era and the memoirs of Henry A. Kissinger. . . . After reviewing Dr. Gleijeses's work, several former senior United States diplomats who were involved in making policy toward Angola broadly endorsed its conclusions.--New York Times

"With the publication of Conflicting Missions, Piero Gleijeses establishes his reputation as the most impressive historian of the Cold War in the Third World. Drawing on previously unavailable Cuban and African as well as American sources, he tells a story that's full of fresh and surprising information. And best of all, he does this with a remarkable sensitivity to the perspectives of the protagonists. This book will become an instant classic.--John Lewis Gaddis, author of We Now Know: Rethinking Cold War History

Based on unprecedented research in Cuban, American, and European archives, this is the compelling story of Cuban policy in Africa from 1959 to 1976 and of its escalating clash with U.S. policy toward the continent. Piero Gleijeses sheds new light on U.S. foreign policy and CIA covert operations, revolutionizes our view of Cuba's international role, and provides the first look from the inside at Cuba's foreign policy during the Cold War.
-->

Me Against My Brother

The mestizo mind : the intellectual dynamics of col …