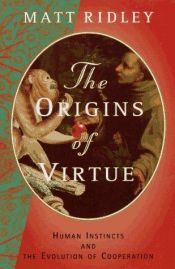 The Origins of Virtue is a 1996 popular science book by Matt Ridley, which has been recognised as a classic in its field. In the book, Ridley explores the issues surrounding the development of human morality. The book, written from a sociobiological viewpoint, explores how genetics can be used to explain certain traits of human behaviour, in particular morality and altruism.
Starting from the premise that society can on a simplistic level be represented as a variant of the prisoner's dilemma, Ridley examines how it has been possible for a society to arise in which people choose to co-operate rather than defect.
Ridley examines the history of different attempts which have been made to explain the fact that humans in society do not defect, looking at various computer generated models which have been used to explain how such behaviour could arise. In particular he looks at systems based on the idea of tit for tat, where members of the group only cooperate with those who also cooperate and exclude those who do not. This allows altruistic behaviour to develop, and causes the optimum solution to the dilemma, to no longer be to defect but instead to cooperate.

The Great Disruption: Human Nature and the Reconsti …

The evolution of culture in animals