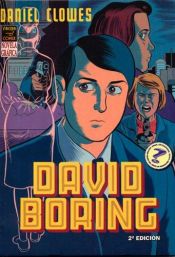 David Boring is a graphic novel by American cartoonist Daniel Clowes. It was serialized in issues #19–21 of the Clowes's comic book Eightball and appeared in collected form from Pantheon Books in 2000.
The book depicts the misadventures of its eponymous character, whose main interests are finding the "perfect woman" and learning more about his father, an obscure comic artist whom he has never met. All this occurs in a nameless American city, against the background of a looming nuclear conflict. Trying to imagine what a one-sentence sales pitch for David Boring would sound like, Clowes told an interviewer "It's like Fassbinder meets half-baked Nabokov on Gilligan's Island."

A Contract with God