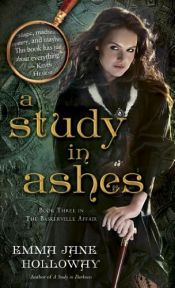 A Study in Ashes: Book Three in The Baskerville Affair

As part of her devil’s bargain with the industrial steam barons, Evelina Cooper is finally enrolled in the Ladies’ College of London. However, she’s attending as the Gold King’s pet magician, handcuffed and forbidden contact with even her closest relation, the detective Sherlock Holmes.

But Evelina’s problems are only part of a larger war. The Baskerville affair is finally coming to light, and the rebels are making their move to wrest power from the barons and restore it to Queen Victoria. Missing heirs and nightmare hounds are the order of the day—or at least that’s what Dr. Watson is telling the press.

But their plans are doomed unless Evelina escapes to unite her magic with the rebels’ machines—and even then her powers aren’t what they used to be. A sorcerer has awakened a dark hunger in Evelina’s soul, and only he can keep her from endangering them all. The only problem is . . . he’s dead.

Praise for A Study in Ashes

“The best book of the series . . . absolutely wonderful . . . I really can’t recommend it highly enough.”—Hidden in Pages

“Brilliantly executed . . . my favorite book of 2013 . . . what a stunning conclusion to such a phenomenal series!”—Fresh Fiction

“Even grander than the books before it with its drama, adventure, intrigue, romance, paranormal, gadgetry and just exciting twistiness to its storyline.”—Delighted Reader

Praise for Emma Jane Holloway’s A Study in Silks

“This book has just about everything: magic, machines, mystery, mayhem, and all the danger one expects when people’s loves and fears collide. I can’t wait to return to the world of Evelina Cooper!”—Kevin Hearne, New York Times bestselling author of The Iron Druid Chronicles

“Holloway takes us for quite a ride, as her plot snakes through an alternate Victorian England full of intrigue, romance, murder, and tiny sandwiches. Full of both thrills and frills.”—Nicole Peeler, author of the Jane True series

“A Study in Silks is a charming, adventurous ride with a heroine who is both clever and talented. The brushes with the Sherlock Holmes mythos only add to the fun of this tale, and readers are bound to fall in love with Evelina and the London she inhabits.”—Philippa Ballantine, author of Geist

The Glass Books of the Dream Eaters