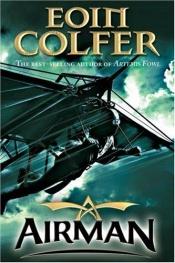 Airman, by Eoin Colfer, is a best-selling historical adventure novel set in the 19th century. It was released in the UK, Ireland and USA in January 2008. The novel was shortlisted for the 2009 Carnegie Medal.
Colfer was inspired to write the book after a frightening skydiving experience. He combined this with his childhood observation that the Saltee Islands would make an excellent prison.
Most of the story is completely fictional. The Saltee islands have been uninhabited since the 19th century, and all of the main characters in the story are fictional.

The Once and Future King

The Shadow in the North

The Plains of Passage