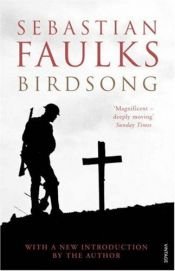 Birdsong is a 1993 novel by English author Sebastian Faulks. Faulks' fourth novel, it tells of a man called Stephen Wraysford at different stages of his life both before and during World War I. Birdsong is part of a trilogy of novels by Sebastian Faulks, together with The Girl at the Lion d'Or and Charlotte Gray; the three novels are linked through location, history and several minor characters.
The novel came 13th in a 2003 BBC survey called the Big Read which aimed to find Britain's favourite book. It has also been adapted three times under the same title – for radio, the stage and television.

Excellent but hard going and distressing at times.

Waiting for the Barbarians