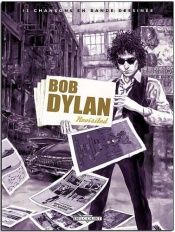 Rendered in striking, explosive graphic form, many of Bob Dylan’s most famous songs―illustrated as they’ve never been before.

For the last forty years Bob Dylan has never ceased to be one of the most creative and inspired musicians in the world. Mesmerized by the power of his lyrics and intrigued by the possibilities of translating his powerful, enigmatic personality into art, thirteen leading graphic artists banded together to create this unusual testament to the universality and transcendent vision of an American musical genius. With their vibrant, unexpected colors and dynamic, cinematic imagery, this group has assembled in Bob Dylan Revisited one of the most provocative interpretations of Dylan’s music in decades. These artists capture the tender emotions, the ineffable sadness, and the romantic overtones of Dylan’s classic songs, at the same time reflecting the moral and political urgency of his music. Each artist’s style surprisingly complements Dylan’s lyrics and offers an irresistible window through which to reconsider one of America’s most enigmatic artists. A deeply respectful and brilliant homage to the extraordinary influence of Bob Dylan.

The Autobiography of Donovan : The Hurdy Gurdy Man

Johnny Cash: I See a Darkness