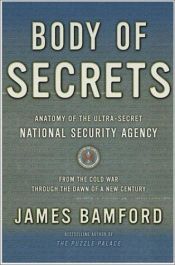 Body of Secrets: Anatomy of the Ultra-Secret National Security Agency

Body of Secrets: Anatomy of the Ultra-Secret National Security Agency is a book by James Bamford about the NSA and its operations. It also covers the history of espionage in the United States from uses of the Fulton surface-to-air recovery system to retrieve personnel on Arctic Ocean drift stations to Operation Northwoods, a declassified US military plan that Bamford describes as a "secret and bloody war of terrorism against their own country in order to trick the American public into supporting an ill-conceived war they intended to launch against Cuba."
For the book, NSA director Michael Hayden gave him unprecedented access. In contrast, his previous book, The Puzzle Palace, was almost blocked from publication by the agency.

The Puzzle Palace : A Report on America's Most Secr …

See No Evil: The True Story of a Ground Soldier in …