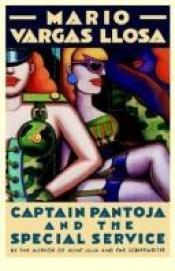 Captain Pantoja and the Special Service

Captain Pantoja and the Special Service is a relatively short comedic novel by acclaimed Peruvian writer Mario Vargas Llosa.
The story takes place in the Peruvian department of Amazonas, where troops from the Peruvian Army are attended to by sex workers, referred to euphemistically in the Spanish term visitadora, meaning “visitor” and in juridical terms it means “auditor”, "inspector" or "examiner".
According to the author himself, the work is based on facts, as he was able to verify them in 1958 and in 1962 when he travelled to the Peruvian jungle. It deals with Captain Pantoja's astonishing efficiency campaign to provide prostitution services for quelling the sexual desires of the Peruvian army soldiers stationed in what is portrayed as an incredibly aphrodisiacal Amazon jungle.

Aunt Julia and the Scriptwriter

The Feast of the Goat