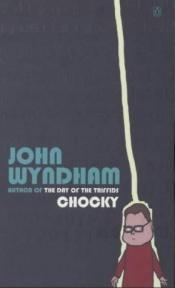 At first they thought that Matthew was just goining through a phase of talking to himself. And like many parents, they waited for him to grow out of it. But as time passed it became worse, not better. Matthew's conversations with himself grew more and more intense. It was like listening to one end of a telephone conversation while someone argued, cajoled and reasoned with another person you couldn't hear or see. Then Matthew began doing things he couldn't do before. Like counting in binary code mathematics. So he told them about Chocky, the person who lived in his head. Whoever or whatever Chocky was, it wasn't childish imagination. It was far too intelligent and frightening for that.

When I was a kid, one of my favorite shows was a British mini-series called Chocky. Years later, I found out it was based on this book. I feel like John Wyndham was probably ahead of his time. Matthew is an ordinary young boy with ordinary abilities. Then one day, something changes. He begins talking to himself... and not just about anything, but intensely and resolutely about subjects the old Matthew would not have understood, far less taken interest in. He develops other interesting talents as well, becoming proficient in mathematics, and showing an unusual gift for art. His parents and his teachers take notice, but not all are prepared for the reality behind the changes.