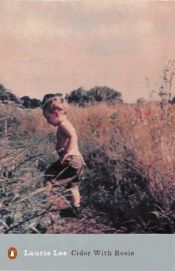 Cider with Rosie is a 1959 book by Laurie Lee. It is the first book of a trilogy that continues with As I Walked Out One Midsummer Morning and A Moment of War. It has sold over six million copies worldwide.
The novel is an account of Lee's childhood in the village of Slad, Gloucestershire, England, in the period soon after the First World War. It chronicles the traditional village life which disappeared with the advent of new developments, such as the coming of the motor car, and relates the experiences of childhood seen from many years later. The identity of Rosie was revealed years later to be Lee's distant cousin Rosalind Buckland.
Cider with Rosie was dramatised for television by the BBC in 1971 and again in 1998 by Carlton Television for ITV. It was adapted for BBC Radio 4 in 2010. It will again be adapted for the BBC in 2015.
It has also been adapted for the stage by James Roose-Evans at the Theatre Royal Bury St Edmunds,

Confessions of an English Opium-Eater