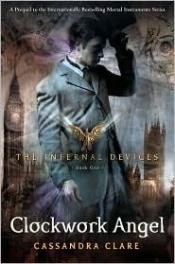 Clockwork Angel is a novel written by Cassandra Clare. It is the first novel in the Infernal Devices trilogy. Tessa Gray, goes to London to live with her brother. When she gets there she is captured by two cruel twins who go by the name of 'the Dark Sisters' for six weeks until William Herondale comes and rescues Tessa.
The book became a best-seller in the New York Times list, debuting number 1 on the children's bestselling list.
The book also contains many quotes referring to famous pieces of Victorian literature, for example, Oscar Wilde's The Importance of Being Earnest, Charles Dickens' A Tale of Two Cities, and the works of Samuel Taylor Coleridge and Alfred Tennyson.

First book in what is in my opinion Cassandra Clare's best trilogy. Wonderful steampunk vibes.

This book is great! A series of twists and turns, Cassandra Clare takes you on a journey you don't want to forget. I highly reccomend this book to all people who like Divergent, The Hunger Games, and Harry Potter.