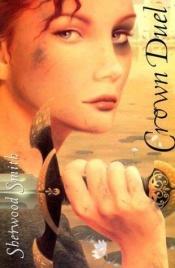 Crown Duel is a 2002 young adult fantasy novel written by American author Sherwood Smith, originally published as two separate books, Crown Duel and Court Duel. Both stories take place in the fictional land of Sartorias-deles, a fantasy world Smith has written about since her youth. The first book follows the adventures of young Countess Meliara "Mel" Astiar of Tlanth as she and her small group of forces rebel against the greed of King Galdran; along the way the mysterious Marquis of Shevraeth aids her, though she distrusts him. With the king now dead, the second part focuses on Mel's journey to the court in Remalna-city, where she must navigate court intrigues surrounding Shevraeth's rise to power as king. In 2008 Smith also published a prequel about Shevraeth: A Stranger to Command.
Smith invented Sartorias-deles as a fantasy world that gradually became populated by humans over a number of centuries; these new arrivals were influenced by the world's indigenous beings enough to better themselves, largely eradicating societal problems like disease and overpopulation.

The Privilege of the Sword

The Fall of the Kings

A scholar of magics