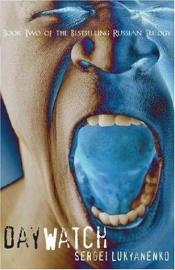 Day Watch is a fantasy novel by Russian authors Sergey Lukyanenko and Vladimir Vasilyev. The second book in the pentalogy of Watches, it is preceded by Night Watch and followed by Twilight Watch, Last Watch, and New Watch. Day Watch also stands out of the pentalogy as the only novel in the series not narrated mainly from Anton Gorodetsky's point of view.
While the 2006 film Day Watch bears the same name, it is actually a loose adaptation of the second half of the first book in the series, Night Watch, and not an adaptation of this novel.
The English translation by Andrew Bromfield was released in January 2007 both in the US and the UK.

M Is for Magic

A Lick of Frost