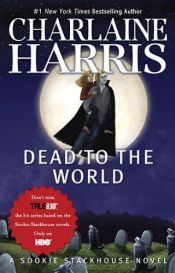 Dead to the World is the fourth book in Charlaine Harris's series The Southern Vampire Mysteries, released in 2004. In Dead to the World, Sookie aids vampires Eric and Pam in their struggle against a coven of witches seeking to take over control of their area, and takes care of Eric after the witches erase his memory.
The novel was adapted as the fourth season of True Blood, the HBO series based on the novels, however with a few notable differences.

From Dead to Worse