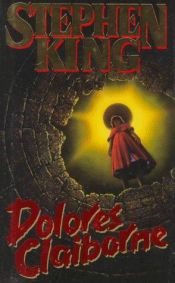 Dolores Claiborne is a 1992 psychological thriller novel by Stephen King. The novel is narrated by the title character. Atypically for a King novel, it has no chapters, double-spacing between paragraphs, or other section breaks; thus the text is a single continuous narrative which reads like the transcription of a spoken monologue. It was the best selling novel of 1992 in the United States.
The book is dedicated to King's mother: "For my mother, Ruth Pillsbury King."