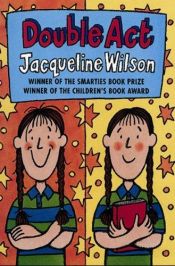 Double Act is a children's novel by Jacqueline Wilson, written in the style of a diary, which features identical twins Ruby and Garnet. Ruby and Garnet love each other dearly but they are completely different. Ruby is loud, outgoing and wild though Garnet is shy, quiet and kind. It was published in 1995, co-illustrated by Sue Heap and Nick Sharratt, and it won both the Nestlé Smarties Book Prize and the Red House Children's Book Award.
Double Act was "Highly Commended" runner up for the annual Carnegie Medal from the British Library Association, recognising the year's best children's book by a British subject. That commendation was approximately annual at the time. The 1995 Medal winner, Northern Lights by Philip Pullman, was named one of the top ten by a panel of experts and was voted the public favourite for the 70th anniversary "Carnegie of Carnegies" in 2007.

The "Witches": Plays for Children