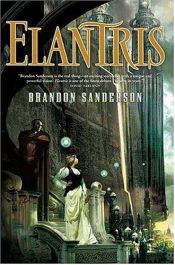 Elantris is a stand-alone fantasy novel written by American author Brandon Sanderson. It was first published in April 2005 by Tor Books and is significant as Sanderson's first widely released book.
Elantris used to be a place of magic, and the Elantrians were gods in the eyes of people, able to heal people with a mere wave of the hand. But after a cataclysmic event, known as the "Reod", the inhabitants of the city became "cursed" and the city was sealed off from society. Anyone affected by the "Shaod", the random turning of a person into an Elantrian, is thrown into the city, to stay there for all eternity. Elantris has also been licensed for localized release in Russia, France, Germany, Thailand, Poland, Netherlands, Brazil and at least five other markets. The book gained generally positive reviews.

Alcatraz Versus the Evil Librarians