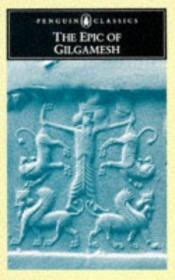 The Epic of Gilgamesh is an epic poem from ancient Mesopotamia. Dating from the Third Dynasty of Ur, it is often regarded as the first great work of literature. The literary history of Gilgamesh begins with five Sumerian poems about 'Bilgamesh', king of Uruk. These independent stories were later used as source material for a combined epic. The first surviving version of this combined epic, known as the "Old Babylonian" version, dates to the 18th century BC and is titled after its incipit, Shūtur eli sharrī. Only a few tablets of it have survived. The later "Standard" version dates from the 13th to the 10th centuries BC and bears the incipit Sha naqba īmuru. Approximately two thirds of this longer, twelve-tablet version have been recovered. Some of the best copies were discovered in the library ruins of the 7th-century BC Assyrian king Ashurbanipal.
The first half of the story discusses Gilgamesh, king of Uruk, and Enkidu, a wild man created by the gods to stop him from oppressing the people of Uruk. After an initial fight, Gilgamesh and Enkidu become close friends. Together, they journey to the Cedar Mountain and defeat Humbaba, its monstrous guardian.

A Heckuva Job: More of the Bush Administration in R …

Making your own days