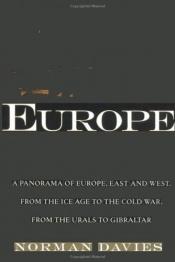 Europe: A History is a narrative history book by Norman Davies.
As Davies notes in the Preface, the book contains little that is original. Primary research was rarely required. Twelve chapters span the European past from prehistory till the disintegration of the Soviet Union. The chapters contain almost three hundred so-called capsules, texts describing separate terms that often exceeds the specific time frame. In the middle part, Davies tries to avoid what he calls the bias of Western Civilization, in the 20th century part he fights the Allied scheme of history. Davies notes at the end of the preface the book is "only one from an almost infinite number of histories of Europe that could be written" and that his work is "the view of one pair of eyes".
Europe: A History. Oxford: Oxford University Press 1996. ISBN 0-19-820171-0
Europe: A History. New York: HarperCollins 1998, corrected edition. ISBN 0-06-097468-0

Postwar: A History of Europe Since 1945

The Wealth and Poverty of Nations: Why Some Are So …

The Map That Changed the World: William Smith and t …

Resurrection: The Struggle for a New Russia

A Great Improvisation: Franklin, France, and the Bi …

Of Paradise and Power: America and Europe in the Ne …

Human Smoke : The Beginnings of World War II, the E …

The Awful End of Prince William the Silent: The Fir …