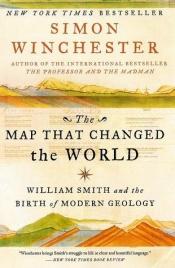 The Map That Changed the World: William Smith and the Birth of Modern Geology

The Map that Changed the World is a book by Simon Winchester about English geologist William Smith and his great achievement, the first geological map of England and Wales.
Smith's was the first national-scale geological map, and by far the most accurate of its time. His pivotal insights were that each local sequence of rock strata was a subsequence of a single universal sequence of strata and that these rock strata could be distinguished and traced for great distances by means of embedded fossilized organisms.
Winchester's book narrates the intellectual context of the time, the development of Smith's ideas and how they contributed to the theory of evolution and more generally to a dawning realisation of the true age of the earth. The book describes the social, economic or industrial context for Smith's insights and work, such as the importance of coal mining and the transport of coal by means of canals, both of which were a stimulus to the study of geology and the means whereby Smith supported his research. Land owners wished to know if coal might be found on their holdings. Canal planning and construction depended on understanding the rock and soil along its route.

Krakatoa: The Day the World Exploded

Longitude: The True Story of a Lone Genius Who Solv …

The Island of Lost Maps: A True Story of Cartograph …

Life on Earth : a Natural History