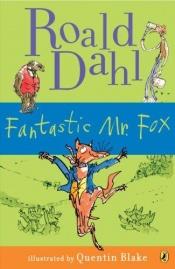 Fantastic Mr Fox is a children's novel written by British author Roald Dahl. It was published in 1970, by George Allen & Unwin in the UK and Alfred A. Knopf in the U.S., with illustrations by Donald Chaffin. The first UK Puffin paperback, first issued in 1974, featured illustrations by Jill Bennett. Later editions have featured illustrations by Tony Ross and Quentin Blake. The story is about Mr Fox and how he outwits his farmer neighbours to steal their food from right under their noses. In 2009, it was adapted into a film by Wes Anderson.
Two audio readings were released, one with the author narrating and another with Martin Jarvis narrating.