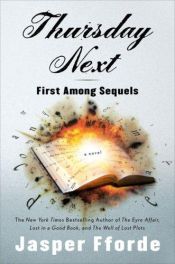 First Among Sequels is an alternate history, comic fantasy novel by the British author Jasper Fforde. It is the fifth Thursday Next novel, first published on 5 July 2007 in the United Kingdom, and on 24 July 2007 in the United States. The novel follows the continuing adventures of Thursday Next in her fictional version of Swindon and in the BookWorld, and is the first of a new four-part Nextian series.
The title was originally announced, at the end of Fforde's novel The Fourth Bear, as The War of the Words.

The Well of Lost Plots