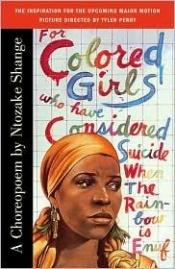 for colored girls who have considered suicide / when the rainbow is enuf is Ntozake Shange's first work and most acclaimed theater piece. It consists of a series of poetic monologues to be accompanied by dance movements and music, a form Shange coined as the choreopoem. for colored girls... tells the stories of seven women who have suffered oppression in a racist and sexist society.
As a choreopoem, the piece is a series of 20 separate poems choreographed to music that weaves interconnected stories of love, empowerment, struggle and loss into a complex representation of sisterhood. The cast consists of seven nameless African-American women only identified by the colors they are assigned. They are the lady in red, lady in orange, lady in yellow, lady in green, lady in blue, lady in brown, and lady in purple. Subjects from rape, abandonment, abortion, HIV/AIDS and domestic violence are tackled. Shange originally wrote the monologues as separate poems in 1974. In December 1974, Shange performed the first incarnation of her choreopoem with four other artists at a women's bar outside Berkeley, California.

The Owl and the Pussy-Cat

For colored girls who have considered suicide / whe …