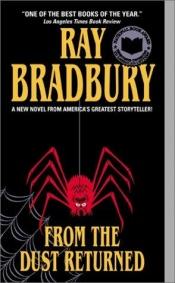 From the Dust Returned

From the Dust Returned is a fix-up fantasy novel by Ray Bradbury published in 2001. The novel is largely created from a series of short stories Bradbury wrote decades earlier, centering around a family of Illinois-based monsters and ghosts named the Elliotts. The stories originally appeared in the magazines The Saturday Evening Post, Mademoiselle and Weird Tales as well as Bradbury's earlier collections Dark Carnival and The Toynbee Convector. Two of the stories, "Homecoming" and "Uncle Einar", were also anthologized in The October Country.
The novel features a cover illustration by Charles Addams, originally created to accompany the publication of the first of the Elliott stories, "Homecoming", in Mademoiselle in 1946. The Elliotts bear a strong resemblance to Addams' own Addams Family characters. Bradbury once discussed collaborating with Addams on an Elliott Family history, although that project never came to fruition.