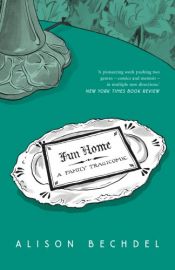 Fun Home, subtitled A Family Tragicomic, is a 2006 graphic memoir by the American writer Alison Bechdel, author of the comic strip Dykes to Watch Out For. It chronicles the author's childhood and youth in rural Pennsylvania, United States, focusing on her complex relationship with her father. The book addresses themes of sexual orientation, gender roles, suicide, emotional abuse, dysfunctional family life, and the role of literature in understanding oneself and one's family. Writing and illustrating Fun Home took seven years, in part because of Bechdel's laborious artistic process, which includes photographing herself in poses for each human figure.
Fun Home has been both a popular and critical success, and spent two weeks on the New York Times Best Seller list. In The New York Times Sunday Book Review, Sean Wilsey called it "a pioneering work, pushing two genres in multiple new directions." Several publications named Fun Home as one of the best books of 2006; it was also included in several lists of the best books of the 2000s. It was nominated for several awards, including the National Book Critics Circle Award and three Eisner Awards.