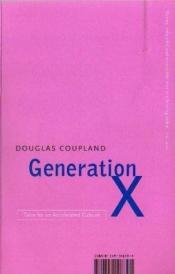 Generation X: Tales for an Accelerated Culture, published by St. Martin's Press in 1991, is the first novel by Douglas Coupland. The novel popularized the term Generation X, which refers to Americans who reached adulthood in the late 1980s. It is a framed narrative, in which a group of youths exchange heartfelt stories about themselves and fantastical stories of their creation.
Coupland released the similarly titled Generation A in September 2009.

Under the Dome: Part 1