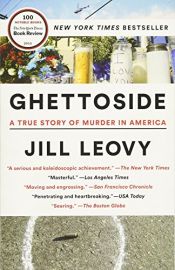 Ghettoside: A True Story of Murder in America

An Amazon Best Book of the Month for February 2015: There’s a statistic that surfaces early in Jill Leovy’s fundamentally important book Ghettoside that should catch your attention: black men compose about 6% of the country’s population, yet they are the victim in nearly 40% of homicides. And who’s killing those black men? The answer is most often other black men. Leovy, a writer for the Los Angeles Times, explores the culture of black violence, specifically in South Central LA, describing a world that seems to exist hermetically sealed off from the rest of the city. With nearly zero mobility and little policing, the people of South Central are left to fend for themselves—further amplifying the devastating drumbeat of gangs and violence. Leovy builds her book around one family’s story: Wally Tennelle, an LA cop, has refused to move his wife and kids out of his Watts neighborhood. Then his youngest son is murdered (unlike most murders in the area, this one was covered by the local media). Through the gathering of evidence, the roundup of suspects, and the trial that ultimately comes to be—all spearheaded by John Skaggs, a very dedicated and capable LA homicide detective—Leovy makes the argument that what places like South Central need is more policing, not less. They need more attention—not debate, finger pointing, and inaction. – Chris Schluep