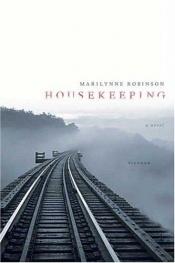 Housekeeping is a novel by Marilynne Robinson. It was published in 1980, nominated for the Pulitzer Prize for Fiction, and awarded the PEN/Hemingway Award for best first novel.
In 2003, the Guardian Unlimited named Housekeeping one of the 100 greatest novels of all time, describing the book thus: "Haunting, poetic story, drowned in water and light, about three generations of women." Time magazine also included the novel in its TIME 100 Best English-language Novels from 1923 to 2005.