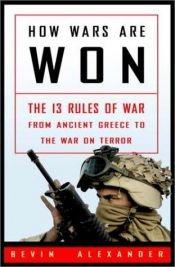 How Wars Are Won: The 13 Rules of War--from Ancient Greece to the War on Terror

Even as we head into twenty-first-century warfare, thirteen time-tested rules for waging war remain relevant.

Both timely and timeless, How Wars Are Won illuminates the thirteen essential rules for success on the battlefield that have evolved from ancient times until the present day. Acclaimed military historian Bevin Alexander’s incisive and vivid analyses of famous battles throughout the ages show how the greatest commanders—from Alexander the Great to Douglas MacArthur—have applied these rules. For example:

• Feign retreat: Pretend defeat, fake a retreat, then ambush the enemy while being pursued. Used to devastating effect by the North Vietnamese against U.S. forces during the Vietnam War.
• Strike at enemy weakness: Avoid the enemy’s strength entirely by refusing to fight pitched battles, a method that has run alongside conventional war from the earliest days of human conflict. Brilliantly applied by Mao Zedong to defeat the Chinese Nationalists.
• Defend, then attack: Gain possession of a superior weapon or tactical system, induce the enemy to launch a fruitless attack, then go on the offensive. Employed repeatedly against the Goths by the Eastern Roman general Belisarius to reclaim vast stretches of the Roman Empire.

The lessons of history revealed in these pages can be used to shape the strategies needed to win the conflicts of today.

Eclipse of the Sunnis: Power, Exile, and Upheaval i …

The Face of Battle

The Bomb in the Basement: How Israel Went Nuclear a …

We Are Anonymous: Inside the Hacker World of LulzSe …