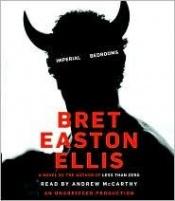 Imperial Bedrooms is a novel by American author Bret Easton Ellis. Released on June 15, 2010, it is the sequel to Less Than Zero, Ellis' 1985 bestselling literary debut, which was shortly followed by a film adaptation in 1987. Imperial Bedrooms revisits Less Than Zero's self-destructive and disillusioned youths as they approach middle-age in the present day. Like Ellis' earlier novel, which took its name from Elvis Costello's 1977 song of the same name, Imperial Bedrooms is named after Costello's 1982 album.
Imperial Bedrooms, unlike Less Than Zero, is plot-driven. The action of the novel takes place twenty-five years after Less Than Zero. Its story follows Clay, a New York-based screenwriter, after he returns to Los Angeles to cast his new film. There, he becomes embroiled in the sinister world of his former friends and confronts the darker aspects of his own personality. The novel opens with a literary device that establishes the world of Imperial Bedrooms to be similar to but not exactly that of Less Than Zero. In doing this, Ellis is able to comment on the earlier novel's style and on the development of its moralistic film adaptation.