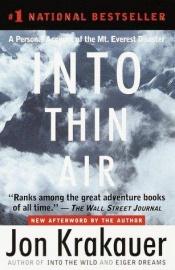 Reeling from the brain-altering effects of oxygen depletion, Jon Krakauer reached the summit of Mt. Everest in the early afternoon of May 10, 1996. He hadn't slept in fifty-seven hours. As he turned to begin the perilous descent from 29,028 feet (roughly the cruising altitude of an Airbus jetliner), twenty other climbers were still pushing doggedly to the top, unaware that the sky had begun to roil with clouds.... "This is the terrifying story of what really happened that fateful day at the top of the world, during what would be the deadliest season in the history of Everest. In this harrowing yet breathtaking narrative, Krakauer takes the reader along with his ill-fated expedition, step by precarious step, from Katmandu to the mountain's pinnacle where, plagued by a combination of hubris, greed, poor judgment, and plain bad luck, they would fall prey to the mountain's unpredictable fury.

Under the Tuscan Sun