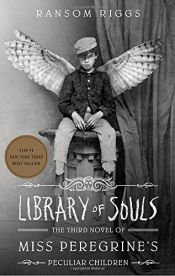 An Amazon Best Book of September 2015: When we last saw Jacob and his peculiar companions in Hollow City they were in the kind of danger that left me chewing my fingernails waiting for the next book to see if they make it out alive. The Library of Souls did indeed pull me off the previous cliff, but if you know Ransom Riggs and the Miss Peregrine’s Peculiar Children series, you know there is more where that came from. As we’ve come to expect, the third book in the series has an abundance of strange and absorbing black and white photographs that came from all sorts of places yet look as though they were created just for this particular piece of the puzzle—at this point, the photos provide an undercurrent as critical to the overall flow of the story as the words themselves. I don't want to spoil the read so I won't tell you (as much as I'd like to...) about reversals and time loops, evil doers and acts of heroism that make up this tantalizing novel, but let me just say that I found the whole thing, from beginning to end, to be every bit as mysterious, surprising, and gratifying as I’d hoped it would be. --Seira Wilson

The Sons of Heaven

The Man Who Folded Himself

A Night in Terror Tower