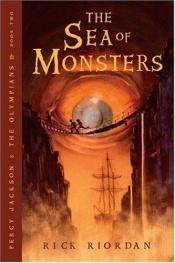 The Sea of Monsters is a fantasy-adventure novel based on Greek mythology written by Rick Riordan published in 2006. It is the second novel in the Percy Jackson & the Olympians series and the sequel to The Lightning Thief. This book chronicles the adventures of thirteen-year-old demigod Percy Jackson as he and his friends rescue his satyr friend Grover from the Cyclops Polyphemus and save the camp from a Titan's attack by bringing the Golden Fleece to cure Thalia's poisoned pine tree.
The Sea of Monsters was generally well received and was nominated for numerous awards, including the 2006 Book Sense Top Ten Summer Pick and the 2009 Mark Twain Award. It sold over 100,000 copies in paperback with over one million copies total and was released in audiobook format on September 6, 2006. The Sea of Monsters is followed by The Titan's Curse, the third book of the five in the series.
A film adaptation of the book, Percy Jackson: Sea of Monsters, was released on August 7, 2013.

Percy is way too entitled at the start of the book. We get it. You're the son of Poseidon, and you went on a quest last summer, but you're 13 so shut up. He did not learn to stop being so dang entitled until he literally got his memory erased in The Son of Neptune. All this being said, I love Tyson, I love Annabeth, and I love how this story mirrors the Odyssey.

A great second book, true to the myths, and amazing as usual for his books.

Another amazing title in this 4 part series.