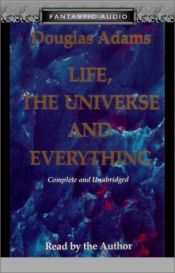 Why is it a mistake to think you can solve any major problems just with potatoes?
How the planet Krikkit, hostile to anything that is not Krikkit, comes to be encased in a Slo-time envelope...
Why Arthur Dent has such an urgent wish to return the Ashes to Lord's Cricket Ground, and why a can of Greek olive oil becomes his most prized possession, symbolizing as it does the oneness of things...
How the Campaign for Real Time is determined to reverse the erosion of the differences between one century and antoher caused by easy time travel... All these mysteries and more come to light in this, the second volume of the Hitchhiker trilogy. Follow Arthur Dent on a day which begins with his visit from Wowbagger the Infinitely Prolonged (whose goal is to insult everyone in the universe - alphabetically) and ends with the Truth, the Whole Truth and Nothing but the Truth - which turns out to have entirely too much to do with frogs.

The Restaurant at the End of the Universe

So Long, and Thanks for All the Fish

The Hitchhiker's Guide to the Galaxy