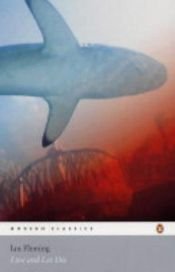 Live and Let Die is the second novel in Ian Fleming's James Bond series of stories, and is set in London, the US and Jamaica. It was first published in the UK by Jonathan Cape on 5 April 1954. Fleming wrote the novel at his Goldeneye estate in Jamaica before his first book, Casino Royale, was published; much of the background came from Fleming's travel in the US and knowledge of Jamaica.
The story centres on Bond's pursuit of "Mr Big", a criminal who has links to the American criminal network, the world of voodoo and SMERSH—an arm of the Russian secret service—all of which are threats to the West. Bond becomes involved in the US through Mr Big's smuggling of 17th-century gold coins from British territories in the Caribbean. The novel deals with the themes of the ongoing East-West struggle of the Cold War—including British and American relations, Britain's position in the world, race relations and the struggle between good and evil.
As with Casino Royale, Live and Let Die was broadly well received by the critics. The initial print run of 7,500 copies quickly sold out and a second print run was ordered within the year.