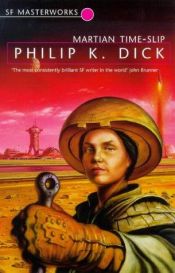 Martian Time-Slip is a 1964 science fiction novel by Philip K. Dick. The novel uses the common science fiction concept of a human colony on Mars. However, it also includes the themes of mental illness, the physics of time and the dangers of centralized authority.
The novel was first published under the title All We Marsmen, serialized in the August, October and December 1963 issues of Worlds of Tomorrow magazine. The subsequent 1964 publication as Martian Time-Slip is slightly longer.

Confessions of a Crap Artist