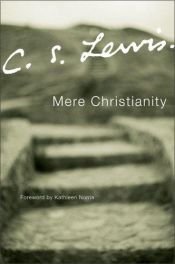 In 1943 Great Britain, when hope and the moral fabric of society were threatened by the relentless inhumanity of global war, an Oxford don was invited to give a series of radio lectures addressing the central issues of Christianity. Over half a century after the original lectures, the topic retains it urgency. Expanded into book form, Mere Christianity never flinches as it sets out a rational basis for Christianity and builds an edifice of compassionate morality atop this foundation. As Mr. Lewis clearly demonstrates, Christianity is not a religion of flitting angels and blind faith, but of free will, an innate sense of justice and the grace of God.

This is supposed to be a "Christian" book and the author makes a lot of arguments and has almost no Bible verse references. I can hardly see how such a book will make good argmuents based on that fact alone. // The author makes a lot of arguments with very poor evidence. On top of this, the book seems to fancy itself being a lament on modern day society than a book based on facts and logical arguments. This presupposes the book to be something that only appeals to the author and other likeminded (similar socioeconomic persons). The problem with this Ian "Christian" books (in my own personal opinion) should be written to as to be read by as many, if not all Christian persons, regardless of background. // Another annoyance I have is that the author starts many chapters with a rebuttal as to why he can't give a more in depth argument, suggesting that if given more space that would improve his argumentation abilities and logical reasoning skills, which I just don't see happening. // My favorite part of the book (serious) was his argument that Jesus could not have just been a Great moral teacher, because he claimed the ability to forgive sins, not just those like a man forgives against those who trespass against himself, but any and all sins. This simple argument, is quite excellent and one of my favorites made on why Christ is not simply just a great teacher. //My final remarks are that the author just seems to be not very well read, and not very good at setting up arguments in general (hint: arguments based off of analogies tend to be able to be torn apart easily). Half of the arguments made seem to be petitions to some veiled sense of natural justice in the world. Other problems include that if one does not agree with the authors geneal sense of "they": be it "Americans" in general, "people" in general, "Christians" in general, "sinners" in general, or really any other stand in for a generalization of a group of people, then so many arguments fall apart in this book, that it is rather rediculous, considering the supposed rather seriousness of the content involved.

The Problem of Pain

The Weight of Glory and Other Addresses

Out of the Silent Planet