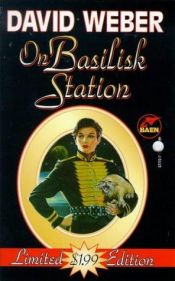 The first novel in David Weber's popular Honor Harrington series, On Basilisk Station, follows Commander Honor Harrington and Her Majesty’s light cruiser Fearless during their assignment to the Basilisk system. Though Basilisk Station and the planet of Medusa have become a dumping ground for misfits and rejects from her home star system of Manticore, Honor is determined to discharge her duty regardless of the circumstances.
The story follows Honor and her crew as they deal with the responsibilities of their assignment. When their duty leads them to discover events that would lead to an invasion of Medusa, they have no choice but to act.
In addition to Honor Harrington, the story includes the first appearances of Alistair McKeon, Hamish Alexander, Lord Pavel Young, Andreas Venizelos, Rafael Cardones, Estelle Matsuko, Paul Tankersley, Mercedes Brigham and Allen Summervale.

The Honor of the Queen