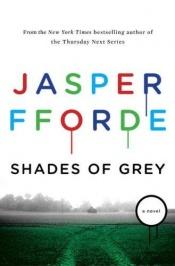 As long as anyone can remember, society has been ruled by a Colortocracy. From the underground feedpipes that keep the municipal park green to the healing hues viewed to cure illness to a social hierarchy based upon one's limited color perception, society is dominated by color. In this world, you are what you can see.
Young Eddie Russett has no ambition to be anything other than a loyal drone of the Collective. With his better-than-average red perception, he could well marry Constance Oxblood and inherit the string works; he may even have enough red perception to make prefect.
For Eddie, life looks colorful. Life looks good.
But everything changes when he moves with his father, a respected swatchman, to East Carmine. There, he falls in love with a Grey named Jane who opens his eyes to the painful truth behind his seemingly perfect, rigidly controlled society.

One of Our Thursdays Is Missing

The Big Over Easy