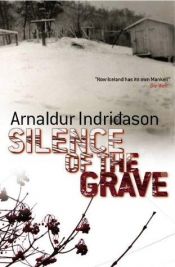 Silence of the Grave is a crime novel by Icelandic writer Arnaldur Indriðason. Set in Reykjavík, the novel forms part of the author's regionally popular Murder Mystery Series, which star Detective Erlendur. Originally published in Icelandic in 2001, the English translation by Bernard Scudder, in 2005, won the British Crime Writers' Association Gold Dagger award for best crime novel of the year. The novel has the distinction of being the last ever to do so, as the award was renamed in 2006.
Human bones are found buried in a construction site in Grafarholt. The police starts investigating only to uncover dark secrets from 70 years ago and in a parallel narrative we hear the story of an abused woman from the same time, who is somehow connected to the bones.