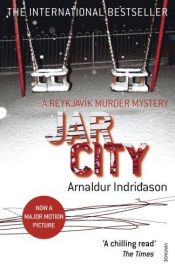 Jar City, also known as Tainted Blood, is a crime novel by Icelandic author Arnaldur Indriðason, first published in Iceland in 2000. It was the first in the Detective Erlendur series to be translated into English. In the UK, the title was changed to Tainted Blood when the paperback edition was released.
The novel is at one level a fierce critique of the gene-gathering work of deCODE genetics:
far from reinforcing the kind of myths of Icelandic national identity promoted by eugenicists earlier in the twentieth century and re-invoked by the publicity machine around DeCODE, Indriđason’s novel uses the figure of the defective gene not only to expose and trouble national mythologies of social and familial cohesion and continuity but to ask some fundamental questions about the meaning of innocence and guilt, justice and punishment in the face of the identification of genes that bear the secret not of life but of death.