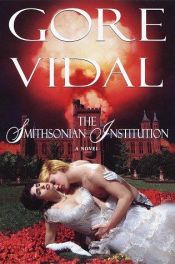 Gore Vidal's novel The Smithsonian Institution is a fictional account of the adventures of "T." as he helps a group of scientists in the basement of the Smithsonian create the neutron bomb, and encounters historical figures such as President Abraham Lincoln, Charles Lindbergh, Eleanor Roosevelt and Mrs. Grover Cleveland.
Vidal supposedly claimed that this was the inspiration for the 2006 film Night at the Museum. The film was in fact based on the 1993 children's book The Night at the Museum. Of course, the original version of that children's book had the night watchmen seeing dinosaurs come to life -- not historical figures -- and not inside the Smithsonian, as they do in Vidal's novel.

The Place of Dead Roads

A Book of Common Prayer