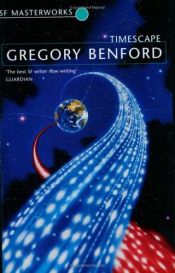 Timescape is a 1980 novel by science fiction writer Gregory Benford. It won the 1980 Nebula and British Science Fiction Awards, and the 1981 John W. Campbell Memorial Award for Best Science Fiction Novel. The novel was widely hailed by both critics of science fiction and mainstream literature for its fusion of detailed character development and interpersonal drama with more standard science fiction fare such as time travel and ecological issues.
Pocket Books used the title of this book for their science fiction imprint.

The Merchant and the Alchemist's Gate