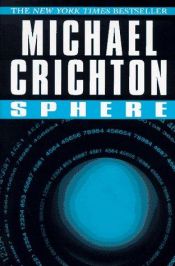 Sphere is a science fiction novel written by Michael Crichton and published in 1987. It was made into the film Sphere in 1998.
The novel follows Norman Johnson as a psychologist who is engaged by the United States Navy to join a team of scientists assembled by the U.S. Government to examine an enormous spacecraft discovered on the bottom of the Pacific Ocean. The depth of coral covering the craft suggests that it has been lying there for over 300 years and so could only be of alien origin.
The novel begins as a science fiction story, but quickly transforms into a psychological thriller, ultimately exploring the nature of the human imagination.