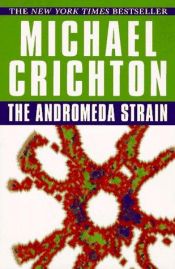 Some biologists speculate that if we ever make contact with extraterrestrials, those life forms are likely to be--like most life on earth--one-celled or smaller creatures, more comparable to bacteria than little green men. And even though such organisms would not likely be able to harm humans, the possibility exists that first contact might be our last.

That's the scientific supposition that Michael Crichton formulates and follows out to its conclusion in his excellent debut novel, The Andromeda Strain.

A Nobel-Prize-winning bacteriologist, Jeremy Stone, urges the president to approve an extraterrestrial decontamination facility to sterilize returning astronauts, satellites, and spacecraft that might carry an "unknown biologic agent." The government agrees, almost too quickly, to build the top-secret Wildfire Lab in the desert of Nevada. Shortly thereafter, unbeknownst to Stone, the U.S. Army initiates the "Scoop" satellite program, an attempt to actively collect space pathogens for use in biological warfare. When Scoop VII crashes a couple years later in the isolated Arizona town of Piedmont, the Army ends up getting more than it asked for.

The Andromeda Strain follows Stone and rest of the scientific team mobilized to react to the Scoop crash as they scramble to understand and contain a strange and deadly outbreak. Crichton's first book may well be his best; it has an earnestness that is missing from his later, more calculated thrillers. --Paul Hughes