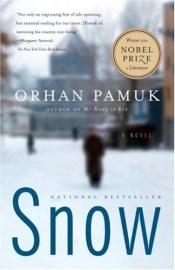 Snow is a novel by Turkish writer Orhan Pamuk. Published in Turkish in 2002, it was translated into English by Maureen Freely and published in 2004. The story encapsulates many of the political and cultural tensions of modern Turkey and successfully combines humor, social commentary, mysticism, and a deep sympathy with its characters.
Kar is the word for Snow, but the main character also abbreviates his name to Ka with the novel set in the eastern Turkish city of Kars. An opening theme concerns reasons behind a suicide epidemic among teenage girls.